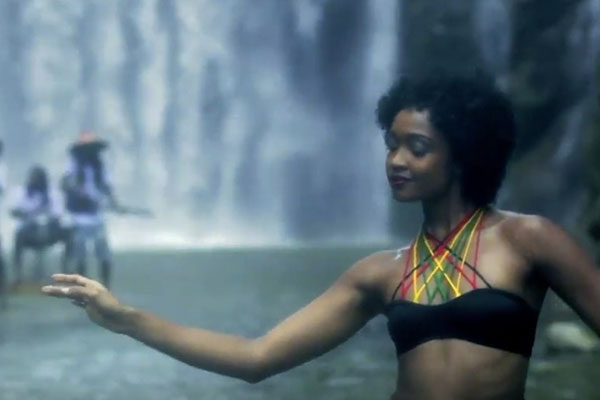 “There’s the Jamaica you see in tourist brochures, and then there’s the hidden Jamaica that looks like it could be in tourist brochures but doesn’t actually see receive many travelers. Reggae Falls, the scene of Raging Fyah‘s “Dash Wata” video, is one of those places. Set in rural Saint Thomas, Jamaica’s easternmost parish, this 70-foot waterfall on the Johnson River gets its name from Antonio Porter, a local resident who’s been hoping to turn the hard-to-reach, man-made cascade — it’s the result of a dam project from a now-abandoned hydro-electric facility — into a proper destination. For now, though, Reggae Falls is Saint Thomas’ secret. At least until people catch “Dash Wata,” an inviting clip sure to inspire visitors to seek out its serene setting. The video, which features the band and a bevy of river sirens splashing around in the waters below the falls, closely follows the song’s lyrics. “Let’s go for a walk, down by the riverside,” Raging Fyah singer Kumar Bent croons, playing the role of an innocent suitor on this sunny track that’s sure to soundtrack Jamaican vacations for years to come.” — via Large Up