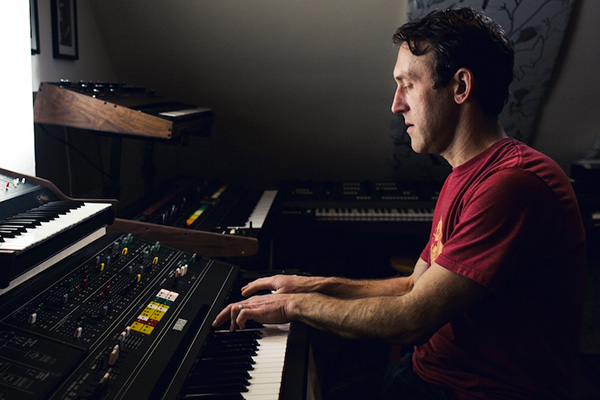 “Last week, the Columbus, Ohio-based RJD2 dropped his sixth studio album, Dame Fortune. Recorded at the tail-end of a 13-year stint in Philadelphia, it’s being billed as a spiritual sequel of sorts to the producer’s 2013 album, More Is Than Isn’t. By many accounts, Dame Fortune is RJD2’s tribute to soul music, in the way More Is Than Isn’t felt partly like a tribute to the Los Angeles Beat scene—though you don’t need to listen to either them that closely to hear elements of both. Ever since 2002’s era-defining breakout Deadringer, RJD2 has become synonymous with his ear for unexpected juxtapositions and larger-than-life climaxes; it’s a technique at the heart of the genre he’s skewed closest to since the beginning—hip-hop—and a hallmark of any obsessive record collector with an ear for the half-forgotten diamond in the rough. But the artist né Ramble Jon Krohn isn’t just a collector of dusty pop culture moments—he’s also a collector of synths. A passionate one: he’s been building out his own home studio since 1997, as well as restoring and building his own instruments since 2004. When he packed up his bags and relocated to Columbus last year, he took his entire arsenal of vintage instruments with him.” — via Thump

Check out the full feature HERE, or stream ‘Dame Fortune’ in full below!