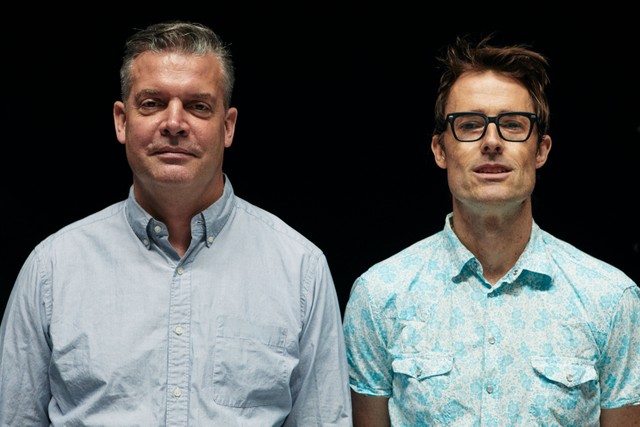 The experimental supergroup Battles, which formed as a quartet way back in 2002, has been pared down little by little over the years. At present they’re a duo comprising guitarist/keyboardist Ian Williams (Don Caballero, Storm & Stress) and drummer John Stanier (Helmet, Tomahawk). The band will be back this fall with their first album as a duo, Juice B Crypts, and judging by the first music they’re sharing from the project, the decrease in personnel has not limited the band’s frantic compositional impulse.

They did have some help with the album, though. Juice B Crypts features appearances from Tune-Yards (on the two-part closing track “Last Supper On Shasta”), Shabazz Palaces, Xenia Rubinos, Jon Anderson, and Prairie WWWW. And lead single “Titanium 2 Step” matches them with Sal Principato of post-punk legends Liquid Liquid, who wails and whimpers and howls all over the band’s busily skronking insanity. The song is billed as an homage to New York, where all involved parties are based, and you can certainly hear the resemblance to Manhattan’s nonstop chaos. – –> Read More + Check out Full Tour Dates Via Stereogum