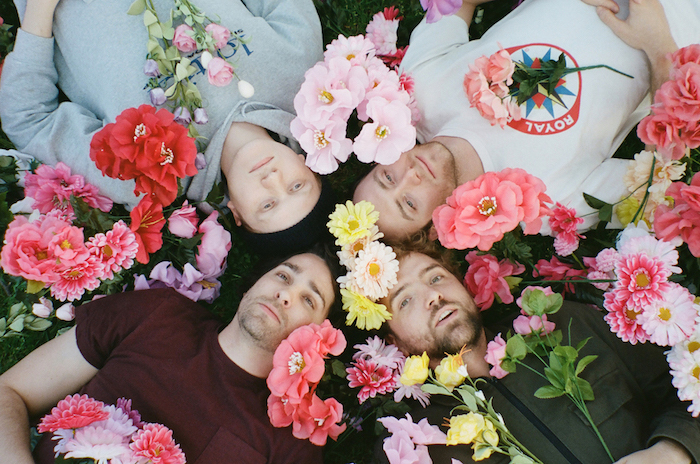 Ahead of their first-ever North American tour, Goon have shared a new song and video (dir. by Vinyl Williams) – “Datura” – off their upcoming debut LP out later this year. The track takes Goon’s 90s college rock tendencies to heavier places, while maintaining a lo-fi, freak folk scuzz.

Since forming in 2016, Goon have built a cult following in LA, landing a spot on Fader Fort and NPR’s Artists To Watch list at SXSW last year. They’ve earned spotlights from Rolling Stone, Noisey, Spin, Fader + more, and have opened for Lucy Dacus, Grandaddy, + more. The band’s first two EPs – ‘Dusk of Punk’ and ‘Happy Omen’ – are out now via streaming and together on a single vinyl LP. 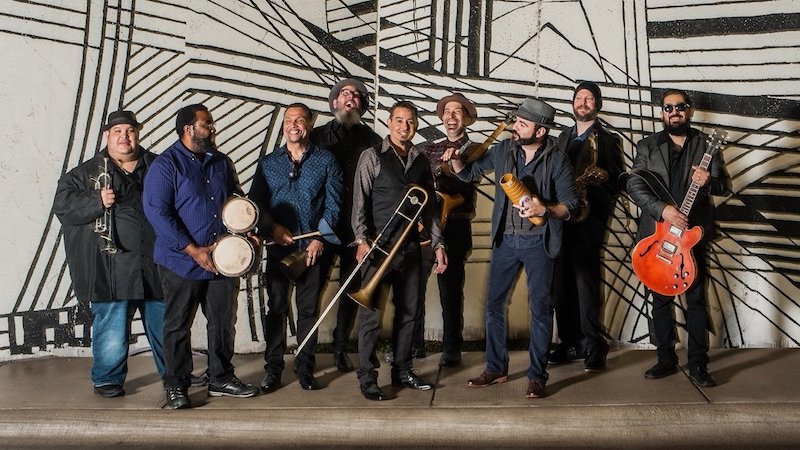 American music can mean many things depending on the part of America you’re experiencing. For much of the Southwest, the American sound includes accordions and cumbias — and that’s just what we hear on American Music Vol. VII by Grupo Fantasma, a prolific nine-piece Latin funk outfit from Austin, Texas.

The album is a perfectly executed bi-cultural statement, made for the millions of folks who love mariachi as much as James Brown. The two-step lilt of the cumbias gets filled out with a soulful R&B edge, and in “La Cruda,” there’s also a respectful nod to the horn-driven Tejano sound of Little Joe Y La Familia. If you want to hear the funky magic that attracted Prince to Grupo Fantasmo’s music back in the day, check out the distorted guitar as it floats over the band’s funky horns.– Read More Via NPR 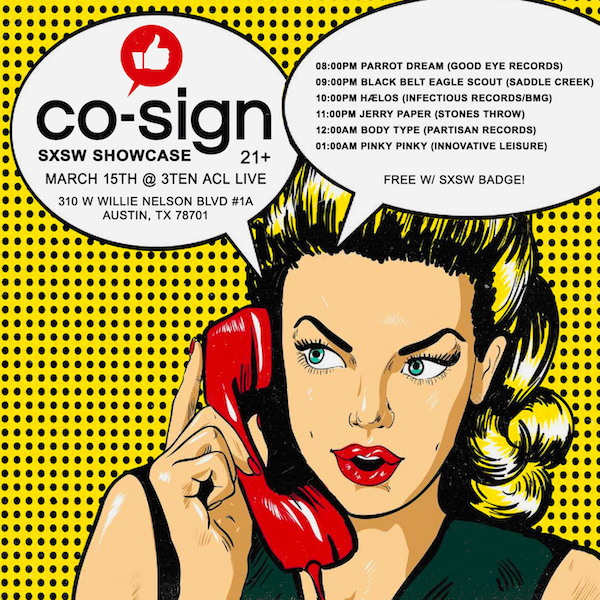 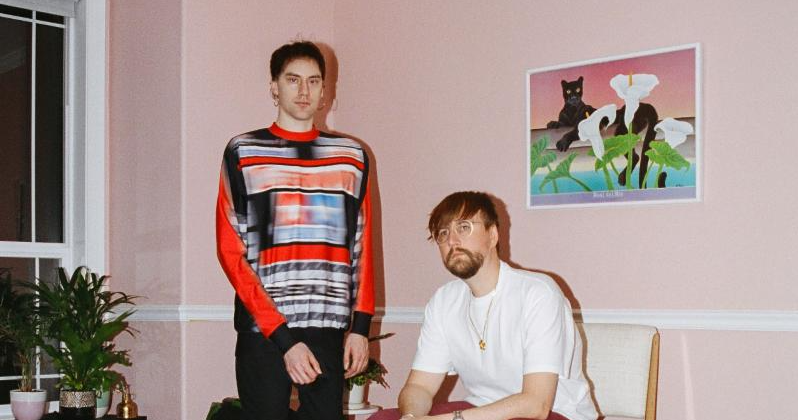 J-E-T-S is the collaborative project of producers Machinedrum and Jimmy Edgar. Beginning in 2012, the two have released a series of EPs on their label, Ultramajic, as well as Leisure System. After sharing “PLAY” featuring Mykki Blanco, J-E-T-S returns today with “POTIONS”, featuring the inimitable Dawn Richard, and news of their debut full-length, ZOOSPA, coming May 24 on Innovative Leisure.

ZOOSPA is fiercely cohesive but wildly varied. Along with Dawn & Mykki, the LP casts a wide net of brilliant collaborators (KingJet, Rochelle Jordan, Tkay Maidza), but ultimately guided by the auteur visions of Edgar and Machinedrum. If many all-time great duos are guided by a competitive rivalry, J-E-T-S discard that sensibility to form a unified whole. If not in sound, they channel the two-heads-one-brain spirit of a more danceable Autechre or Outkast raised on the Belleville Three and first wave IDM. If you heard Timbaland and The Neptunes in 1999, this is what you’d expect pop music to sound like 20 years later.

“For nearly 20 years, Rodrigo Sanchez and Gabriela Quintero have been marrying their love of metal with nylon-stringed acoustic guitars, releasing an impressive catalog of albums that showcase their remarkable dexterity and gift for reimagining heavy rock sounds as acoustic instrumentals. Now comes one of their most surprising recordings to date.” – NPR

Renowned guitar virtuosos Rodrigo y Gabriela have announced today’s premiere of their visceral new single, “Mettavolution,” the latest song form their eagerly awaited new album of the same name. The band’s fifth studio album arrives everywhere on April 26 via ATO Records. The song’s arrival is heralded today with its premiere via Guitar World magazine. METTAVOLUTION is available for pre-order now, with the first 500 pre-orders receiving an exclusive autographed postcard from Rod and Gab themselves.

The duo’s first album in five years, METTAVOLUTION marks the most ambitious music of Rodrigo y Gabriela’s remarkable two-decade career. Three years in the making, the LP embraces the duo’s passionate interest in Buddhism, the history of human evolution and the liberation of the potential we have as a species, all expressed through the medium of two acoustic guitars. Mettavolution? “Metta” is a Sanskrit word for the meditative condition that produces compassion and benevolence. It is a “practical state of mind” as well, according to Gabriela, “something you practice like an instrument to become a better citizen, in a more evolved place.” Conceived and composed in their studio in Ixtapa on the Mexican Pacific Coast, the music of METTAVOLUTION was road-tested around the world on tour in 2017 and 2018 before being recorded late last year in Los Angeles with multiple GRAMMY-winning producer Dave Sardy (Oasis, LCD Soundsystem, A Perfect Circle, Band of Horses) behind the board.

METTAVOLUTION gathers six white-hot new Rodrigo y Gabriela compositions – much of which acknowledge the duo’s thrash-metal roots back in Mexico City – as well as an inspired, side-long cover of Pink Floyd’s sprawling “Echoes” – originally found on 1971’s MEDDLE – audaciously reimagined for two acoustic guitars. Rolling Stone recently hailed the 19-minute epic as a “Song You Need to Know,” noting, “(‘Echoes’) is such a signature song, it’s hard to imagine anyone else doing it justice, yet somehow the Mexican acoustic-rock duo Rodrigo y Gabriela landed on a brilliant interpretation… Like the original, the song is its own journey, and it’s beautiful.” “(Rodrigo y Gabriela) make (‘Echoes’) entirely their own,” wrote NPR Music, “turning the original version’s extended psych-jam and terrifying atmospherics into percussive knocks on their guitars and strings and other strange, tactile effects. It only gets better and more breathtaking the deeper you get into the track.”

With shimmering chimes hitting gently in the backdrop, “Devils I Know” is a mesmerizing new track that makes the daunting task of facing one’s own demons feel like a romantic conquest. CLAVVS, consisting of Amber Renee & Graham Marsh, deliver a passionate Portishead-esque vocal performance and a lush instrumental production that help drive the evocative lyrics right through your soul. The songs intense instrumental builds carry along a burning resolve that makes this track feel so empowering by the end. Of the lyric’s personal nature, lead singer Renee shared, “this is me acknowledging my bad habits and realizing that I can change them. All of the songs on this EP are about letting go of things, and this one, in particular, is about letting go of who I used to be.”

Already being viewed by many critics as an artist to watch for at this year’s SXSW, CLAVVS is set to really make a mark on the indie-pop world this year. Keep an eye on them and check out their upcoming shows below:

Nicola Cruz’s new album Siku (out January 25 via Buenos Aires label ZZK) may sound a bit less adventurous on the club fusion front than its predecessor, 2015’s Prender El Alma. On Siku, electronic vibes are used sparingly, “just to color the whole thing,” as Cruz explained in a phone interview. Instead, his focus was mainly on the creation process, which took place with a global cast.

As a rule, his Siku collaborators are artists who Cruz finds “share the same vision and feeling towards music, which is openness,” he says. Among the new songs you will find the album’s second teaser “Arka,” which Cruz recorded in “an artificial cave done by an architect” with Ecuadorian wind instrumentalist and neighbor Esteban Valdivia on side of the Ilaló volcano, which Cruz can see from his current home outside of Quito. The results combine fiery percussion with Valdivia’s flutes; very little post production frill is evident. Other collaborators on the album include a diversity of artists exploring the edges of folk music; Brazilian artist Castello Branco, Portuguese percussionist Márcio Pinto, the Colombia-Sweden based duo Minük, and Chilean members of the group Altiplano Mauricio, Julio, and Pablo Vicencio.

READ THE FULL STORY VIA REMEZCLA