Comprised of 15 new, original songs and two mystic interludes written and arranged by lead vocalist David Hinds and co-produced by bandmates Sidney Mills and David Elecciri, Mass Manipulation marks Steel Pulse’s twelfth studio album—and a timely return to the band’s signature message of social justice and bridging the racial divide through the power of music. While many of the actors and details of the world’s socio-political landscape have changed in the four decades that Steel Pulse has been committed to bettering mankind through music, the band continues to engage controversial topics of human rights on a global scale.

Rolling Stone calls the track “a meditative rocker with deftly placed horns, guitars and strings bubbling up above the song’s thumping groove,” noting that “David Hinds’ lyrics touch on injustice and violence, but end with a revolutionary call as he sings, ‘The whole world’s taking advantage/While we stand aside and look/It was prophesied we’d rise again/Just take a second look.’” – Rolling Stone

The London-based songwriter/producer Georgia (not to be confused with the New York electronic duo of the same name) creates her music from a melange of styles including grime, dub, and post-punk. She began her career as a session drummer for Micachu and Kwes, releasing her self-titled debut album—a collection of experimental pop songs à la M.I.A.—in 2015. But Georgia’s breakout single came last November with the UK sleeper hit “Started Out,” which matched the bright electro-pop of CHVRCHES with a groovy ‘80s Chicago house bassline.

Georgia continues to ride the line between club music and pop with her new single “About Work the Dancefloor.” It’s charged with the nostalgia for the golden age of ‘80s electro-pop, calling to mind both the romance of John Hughes movie soundtracks and the acrid nightlife of New Order’s famed Hacienda warehouse. But if you come for the throbbing synth-pop, you should stay for Georgia’s disarmingly tender vocals, which split the difference between Robyn’s vulnerability-as-strength philosophy and the xx’s plain-spoken intimacies. – Read More Via Pitchfork 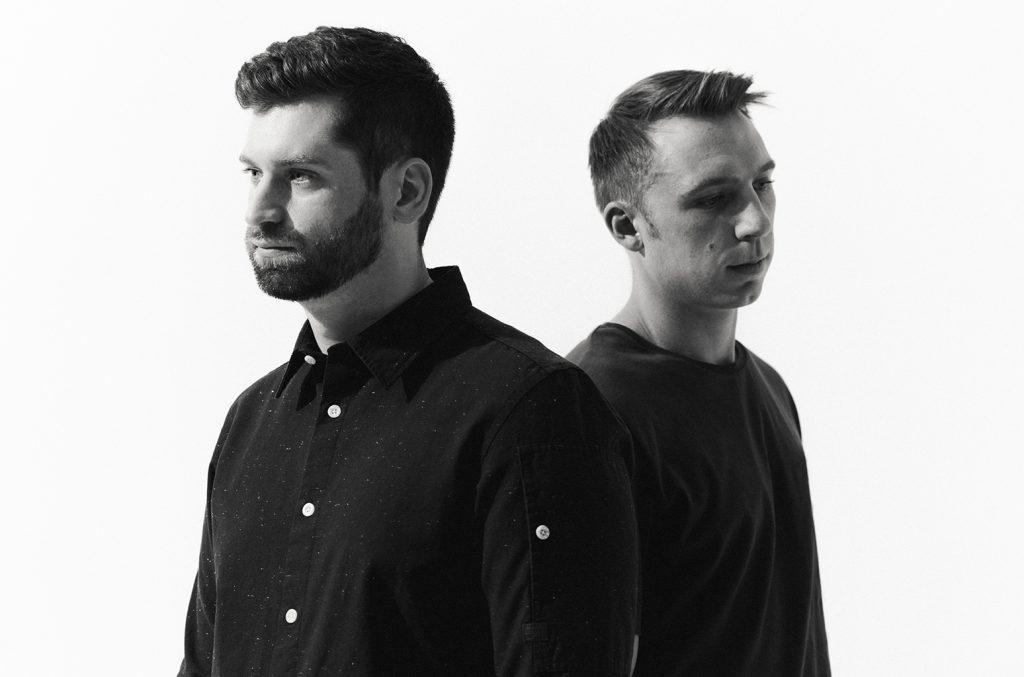 There was accidental foreshadowing in ODESZA’s sophomore album title. A Moment Apart did set forth a touring era that will forever stand strong as its own shining chapter in the duo’s tale. It brought the pair Grammy nominations and arena-star status. It even helped ODESZA launch its own stand-alone music festival, which rocked the crowd at Riviera Maya, Mexico, about a week ago.

All things must come to an end, and ODESZA now hears the studio’s call, but before bowing out of this moment entirely, there will be one last giant celebration. The band announced one final hurrah for the mind-blowing tour production. The symmetrical stage, the high-end visuals and, yes, that awesome drum line will grace the stage at Los Angeles State Historic Park Saturday, July 27, for a real whopper of a last performance. Big Wild, Evan Giia, Memba and Ford. will provide opening support. 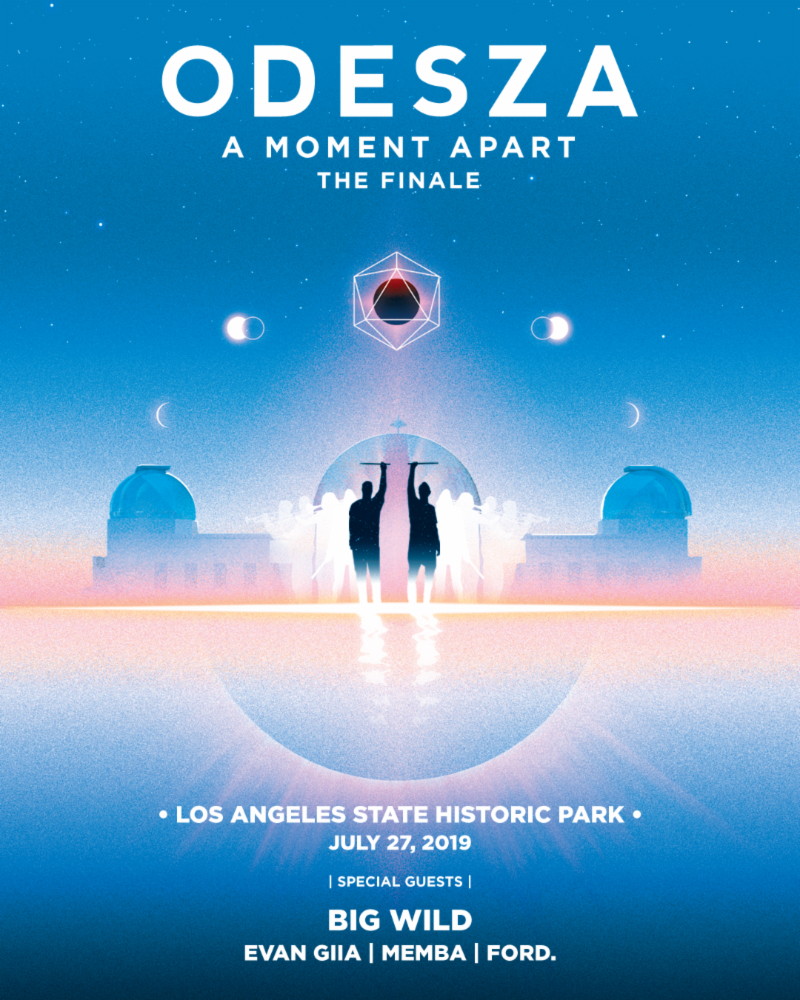 For many, Miles Francis’ 2018 debut EP, Swimmers, was a first introduction – but he had already been around for years, keeping time for some of the most dynamic performers in the world. Born and raised in New York City, Francis grew up seeing his father play trumpet at local jazz clubs, playing raucous rock shows in high school, and leading underground afrobeat parties in college. Some might have seen him on Late Show with David Letterman drumming with Arcade Fire’s Will Butler, or on Jimmy Kimmel Live! as the kit drummer for Antibalas; in South Africa onstage with Angelique Kidjo, in Hollywood playing with Amber Mark, or at the Apollo Theater backing up the late Sharon Jones.

Now, it is clear that Swimmers was only the beginning, as Miles Francis presents his second EP, Doves. This new EP presents 6 songs just as emotive and catchy as his first effort, yet with a wider palette of expression. As is the case with Swimmers, each song on Doves has its own sound, yet they cohesively live under the umbrella of Francis’ musicality. Recording himself in his Greenwich Village basement studio, Miles plays each instrument live, without any quantization, looping or autotune. The result is organic modern pop music: contemporary indie intuition with the untampered purity of the classics.

Injury Reserve just their new single “Jailbreak the Tesla” featuring collaborator Aminé, along with a video directed by group member/producer Parker Corey. Full of Hype Williams references a la fisheye lens shots + quick cut cinematography the video is yet another impressive visual from the Phoenix, Arizona rap trio who dropped their video/track “Jawbreaker” just last month. Check it above!

Read more on the band via Stereogum –> HERE!

When Portland indie rock/indie folk band Ages and Ages released their last album, Something to Ruin, in the summer of 2016, they were putting music out into a world that still more or less made sense to them. That all changed in November, naturally, when the country turned itself upside down in support of a burgeoning despot, and nothing has quite been the same since. Except, that is, for the musical passion of the band’s “brain trust,” members Tim Perry and Rob Oberdorfer, who met twice weekly to commiserate in a world of woe—and work on new music. At the time, it was just a way to cope—the band calls it “musical group therapy”—but out of those challenges, a new album was born.

Ages and Ages answer is their new album Me You They We, which they’re announcing today exclusively via Paste, along with the debut of the song “Just My Luck,” which you can listen to above. “Just My Luck,” is a bouncy but slightly macabre sounding track that fills the room with nuanced, ethereal harmonies, spacey keys and the tiniest bit of irresistible xylophone. Perry’s delicate voice is front and center, but it gets some key support from his compatriots as the song swells to its big conclusion, where crashing cymbals put an exclamation point on the proceedings. Oberdorfer notes that the song proved to be something of a bear in the studio, being “discarded and reinvented” 14 times before the final version came together.-Paste

On “Bad To Worse,” Ra Ra Riot approach the theme of driving from a more wearied perspective, recounting a nine-hour journey from Washington D.C. to the outermost point of Cape Cod. “It’s about watching the world from the window of the car or bus, and how there’s a familiarity to everything but it’s never the same as it once was,” says lead singer, Wes Miles. A simply adorned song, it offsets those wistful lyrics with bright beats and warm textures sculpted with the help of Batmanglij’s vast collection vintage synths.