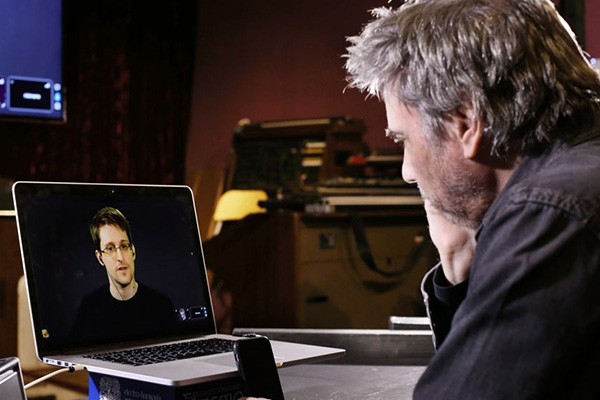 “French composer Jean Michel Jarre and whistleblower Edward Snowden, two enigmatic figures for starkly contrasting reasons, have collaborated on “Exit,” a track off the electronic music pioneer’s upcoming new LP Electronica 2: The Heart of Noise. For the pulse-racing cut, the composer travelled to Russia to work with the former NSA analyst, who remains in exile after leaking classified documents detailing how the United States and other countries are spying on their citizens.” — via Rolling Stone

Listen to “Exit” below! 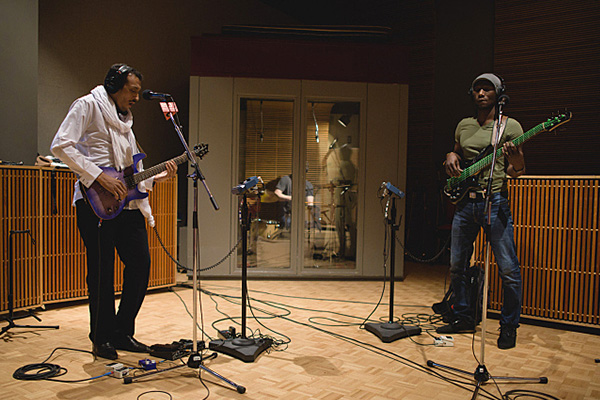 “Ahead of his performance in the First Avenue mainroom, Bombino visited The Current once again to perform live in-studio and to chat with host Jade about his new album, Azel, produced by Dave Longstreth of the Dirty Projectors. With the help of a translator, Bombino — aka Omara Moctar — explains that the unique “Tuareggae” rhythm that shines through in his songs is the result of simply being in tune with his guitar. And not only is Bombino giving his guitar a voice, but he’s giving the Tuareg community a voice through his connection with the instrument and his travels. Bombino has become somewhat of an ambassador for the community, for which he is honored.” — via The Current

Watch video from the performance of “Akhar Zaman (This Moment)” below, and click HERE for audio from the full in-studio session! 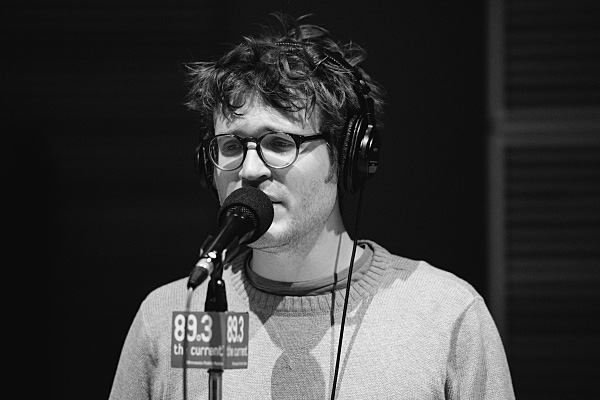 “The year 2013 proved a bit grueling for the band Ra Ra Riot. After playing 125 shows that year, the band took a moment to catch their collective breath. When making their latest album, Need Your Light, Ra Ra Riot wanted to take their time. “We decided we weren’t’ going to rush into anything,” frontman Wes Miles explained. “That kind of provided us with a lot of mental freedom, and that’s kind of where we took a lot of inspiration from the beginning to the end of making this record. That’s part of what allowed us to have more upbeat music.” Now touring in support of Need Your Light, which includes a stop at the Triple Rock Social Club in Minneapolis, Ra Ra Riot stopped in to The Current‘s studio for a session hosted by Jade. Along with Miles, Ra Ra Riot comprise Milo Bonacci on guitar, Mathieu Santos on bass, Rebecca Zeller on violin, Kenny Bernard on drums and Lavena Johanson on cello. On Need Your Light, Ra Ra Riot collaborated with producer Rostam Batmanglij, formerly of Vampire Weekend. Those early collaborations ultimately led to the realization of the full album. Listen to the complete in-studio session to hear more about Ra Ra Riot’s work with Batmanglij, about their origins as a house-concert band, and about the benefits of Wes Miles’ decision to wear his contacts while performing onstage.” — via The Current

Click HERE to listen to the full in-studio session! Need a taste first? Check out the video for ‘Water’ below! 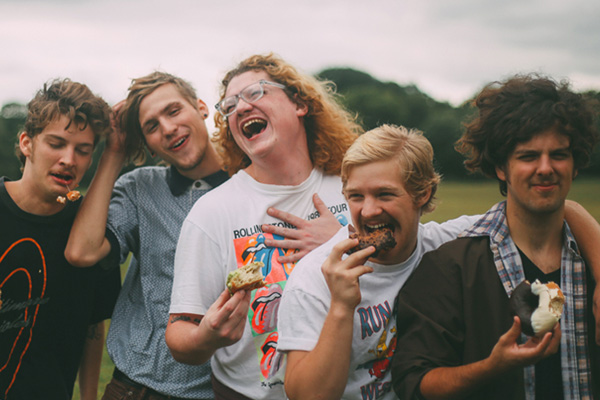 “These fuckin guys. Look at them. Enjoying their donuts! Give us a bite. Sun Club have just finished touring in Europe with Hinds having THE BEST TIME, because Hinds really know how to tour, and we’ve seen Sun Club before, and they really know how to party. Dream combo, basically. From there the Baltimore troupe continue their jaunt around the UK before heading back Stateside to team up with Ra Ra Riot and PWR BTTM. Below is their video for “Summer Feet“: the visuals are very weird and the music is excitable, lo-fi indie-pop with the kind of yelps that make you think the singer’s trying to walk across a bed of coals to get somewhere he’s really stoked about arriving at. Like, the other side—where the donuts are. According to the director Tyler W. Davis, the video “follows an downbeat outsider as he stumbles through his unfortunate life. The video takes place right where ‘Tropicollar Lease’ left off, and many surprise guests pay a visit to our dear loner friend.”” — via Noisey

Watch “Summer Feet” below, and check out the dates from their upcoming headlining tour! 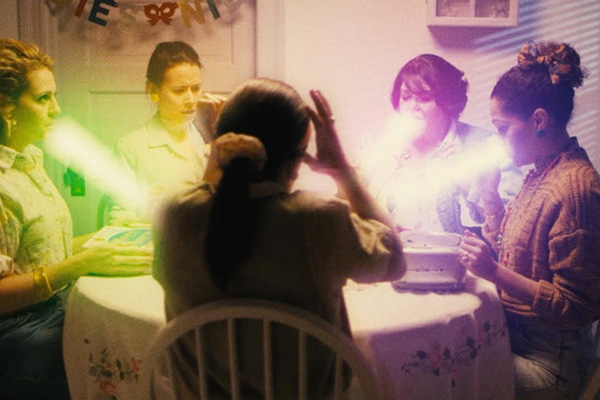 “All moms deserve a ladies night—you know, kicking back with a couple bottles of rosé and a nice veggie platter, catching up on the latest gossip and tripping out on interdimensional crystals while strapping young men feed you Bagel Bites. Moms are the best! That’s more or less the gist of Brooklyn dance outfit French Horn Rebellion‘s new video for “Foolin’ Around,” a delightfully bizarre take on girls-night-in that plays like the surreal, funky love child of the videos for Beck’s “Sexx Laws” and Pat Benatar’s “Love is a Battlefield.” Here’s what LA-based director Ariel Fisher had to say about it: “This 90s-inspired video came about when I noticed that most commercials from that time portrayed women in very limited roles. French Horn Rebellion was completely down to flip those stereotypes on their head in a playful way, showing us what moms really do on ladies night.” The video is the latest output from last year’s Foolin’ Around EP, and the group will hit the road later this summer in support of a new forthcoming full-length.” — via Noisey

Watch “Foolin’ Around” below! 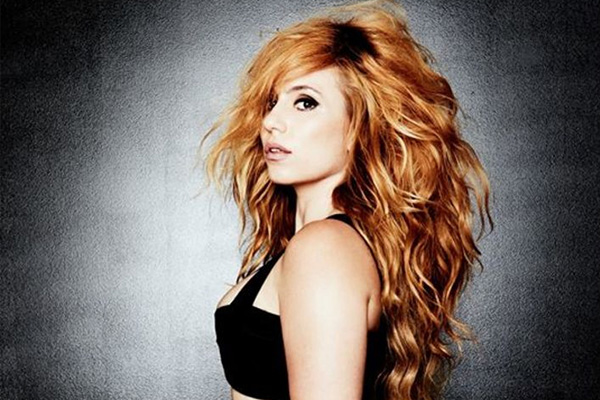 “Clairy Browne provides us with a whole new pop sound, on her lates, exclusively premiering on BUST.com!olo album Pool… The Australian born singer/songwriter’s mix of R&B and pop music feels like she’s calling summer to ask if it wants to hang out. This album is a departure from her last release, Clairy Browne and The Bangin’ Rackettes which had a much more retro vibe. Here, Browne was influenced by artists like Grace Jones, Tina Turner, Nicki Minaj and Beyoncé. On Pool, she channels the lineage of strong women and gives us a throwback to pop’s past… For the album, Browne collaborated with executive producer and songwriter Amanda Warner a.k.a. MDNR, Jesse Shatkin, Jimmy Harry, Rob Kleiner, and Peter Wade.” — via Bust

Listen to ‘Pool’ in its entirely courtesy of Bust below! 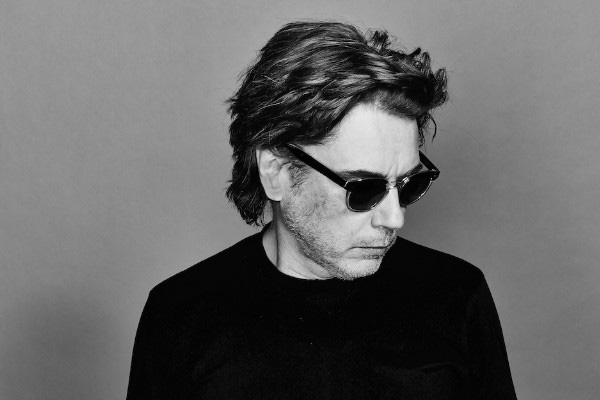 “[The] forthcoming Electronica Vol. 2: The Heart of Noise — the companion/follow-up to last year’s Vol. 1: The Time Machine — neatly encapsulates [Jean-Michel] Jarre’s vision: storytelling inspired by the films of David Lynch and John Carpenter (both of whom he recruited for this project), artists who have a “recognizable sound,” and the sound-making machines upon which he’s built his career.

For Electronica’s dual LPs, Jarre recruited dance music’s past and present. Moby, Gesaffelstein, Laurie Anderson, and M83, among others, lent their talents to the first half, and the second features Primal Scream, the Pet Shop Boys, and cult-favorite soundtrack staples Yello. Each of its 17 tracks are a collaboration between Jarre and the featured artist (even though Jarre admits the idea of a song “feature” is so commonplace that it’s “banal,” so perhaps “special flower” is more appropriate), conceptualized overall as a tribute to Italian experimentalist and synthesizer builder Luigi Russolo, who also wrote 1913’s Futurist manifesto The Art of Noises. “He said musicians of the future will not stay stuck in the limited range of acoustic instruments,” Jarre explains, “but technology will allow musicians in the future to be their own painter, to paint their own sounds. In a sense, DJs are the grandsons of Russolo.”

In advance of The Heart of Noise’s May 6 release via Sony Music International, SPIN emailed a number these “grandchildren” — Jeff Mills, Julia Holter, Gary Numan, members of the Orb, Peaches, and Jarre’s countrymen Sebastian Telliér and Rone — to find out how they got involved in Electronica Vol. 2 and how Jarre has influenced their own musical careers.” — via Spin

Click HERE to read what Jean-Michel Jarre’s collaborators had to say about the project, and check out the album trailer below!