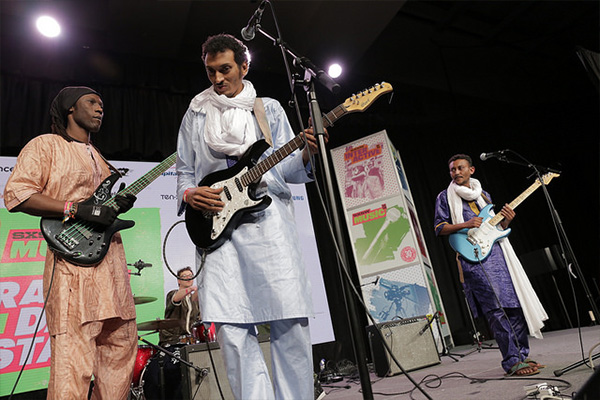 “Niger-born guitarist Bombino was part of the diverse, international lineup of this year’s SXSW Radio Day Stage, powered by VuHaus, on Friday, March 18, broadcasting live from Austin, Texas, on WFUV 90.7FM with a video simulcast on VuHaus. Bombino is steeped in the rich Tuareg tradition of desert blues, but for his third solo album, Azel, he’s forged a local, Brooklyn bridge with Dave Longstreth of Dirty Projectors. Azel, released on Partisan Records on April 1, was produced by Longstreth, and it deftly illuminates Bombino’s nimble guitarwork and lyrical poetry, sung in his native Tamashek. It’s a blistering, buoyant and life-affirming album, simmering with hypnotic trance (“Akhar Zaman (This Moment)”) and what Bombino likes to call “Tuareggae,” blending muscular, sand-lashed blues with sunnier Jamaican rhythms. Bombino, real name Omara Moctar, recorded his last album, 2013’s Nomad, with the Black Keys‘ Dan Auerbach so he’s no stranger to global partnerships. For Azel, he travelled to Woodstock to work with Longstreth (and according to an article in Rolling Stone, also introduced the Dirty Projectors’ frontman to the finer points of Mark Knopfler’s guitarwork).” — via WFUV

Check out audio from the session below, or click HERE to watch a few video clips. 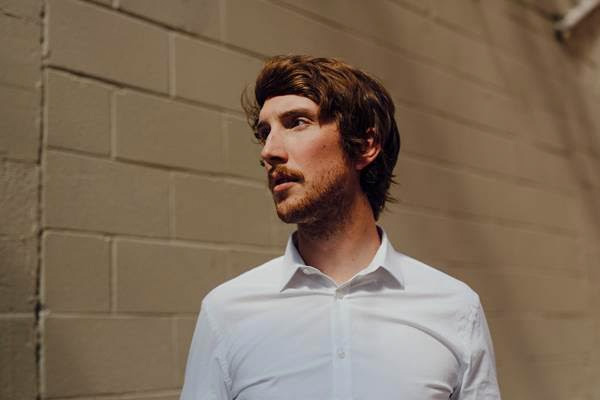 “It’s been a while since we heard from Aidan Knight. His last album, the critically acclaimed Small Reveal, was released in 2012. And the last time CBC Music caught up with him was at the 2013 CBCMusic.ca Festival, where he performed a blistering set. The wait between albums and visits to CBC Music have been well worth the wait. His just-released full-length album, Each Other, takes Knight’s songwriting to a new level. After an afternoon of rehearsal, the quietly nervous Knight and his band performed this new material for the very first time in front of an intimate audience in CBC Music’s Studio 211. And it’s a good thing that he did these performances, as his Canadian fans will have to wait a few more months before they can see him live. Knight and his band are hitting Europe and the U.K. during February and March, and won’t be seen in North America until April.” — via CBC 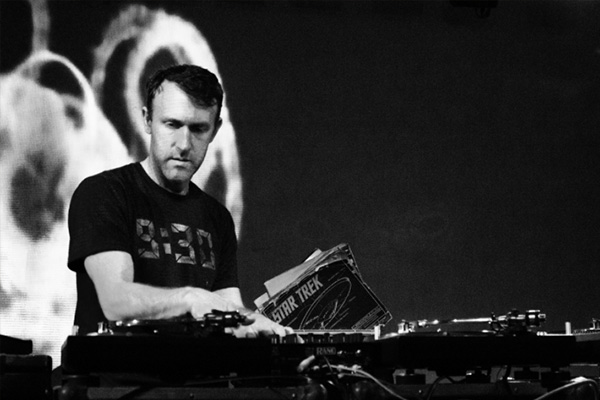 “With crate-digging skills to rival Madlib and Shadow, Ramble Jon Krohn (aka RJD2) has recorded for labels like El-P’s Definitive Jux and XL Recordings, and remixed artists from Nightmares on Wax to Massive Attack. One of his tracks also serves as the opening theme for “Mad Men“. This new album (coming out on his own RJ’s Electrical Connections imprint) finds the veteran beat producer riffing on the Philly soul sound of his hometown and working with guest vocalists Aaron Livingston (aka Son Little) and frequent collaborator Phonte for a collection Okayplayer calls “towering soul, jazz and funk, blended with the frequency-freaker’s hallmark knock.”” — via Hype Machine

Listen to the full album stream HERE, or check out the lead single, “Peace of What” below! 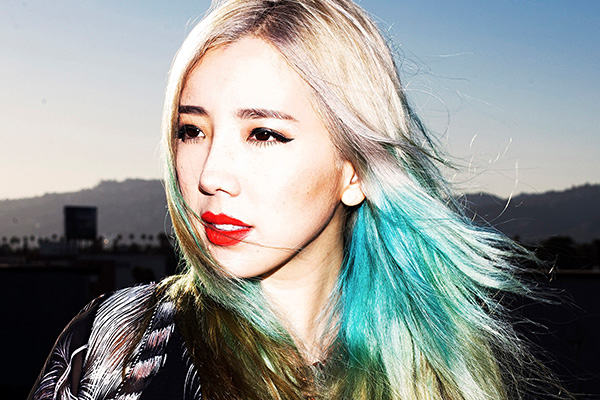 “Honestly, you should already be listening to TOKiMONSTA. She’s one of the funkiest producers on the scene. She’s been bending beats like they were corners in her Chevy ‘64 since before most of these experimental hopefuls picked up a cracked version of Fruity Loops. Her roots are planted firmly in a hip-hop daze, but her most recent album, Fovere, self-released on her newly launched imprint Young Art Records, flirts heavily with the LED-lit EDM universe. It’s a move that caught some old-school fans off guard, but dig deeper than the album’s loudest track, “Put It Down,” and you’ll hear there’s plenty of ethereal weirdness to go around. Fovere is the sign of an artist coming into her own, unafraid of what people might think and ready to embrace every aspect of her creativity, and we are all about that. We look forward to hearing what this tastemaker will put out as the head of her own label.” — via Insomniac

Check out “Starlight Lace” from ‘Fovere’ below! 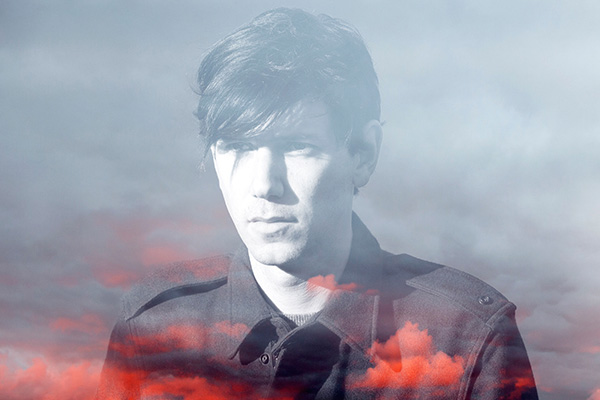 “Montreal-based electronic producer, DJ, and record label runner Tiga has been a key figure in the post-millennium electronic/club world, emerging on the scene with his first single in 2001 and proceeding to unleash two albums, countless singles, as well as high-profile remixes along the way. His exclusive guest DJ mix for Midnight in a Perfect World precisely storms through heavy-hitting techno, house, electro, and tech-house that also includes some of his biggest club singles over the years. His mix also coincides with the release of his third album ‘No Fantasy Required,’ his first full-length in six years that continues to showcase his wild exploration of electro, club, and pop sounds.” — via KEXP 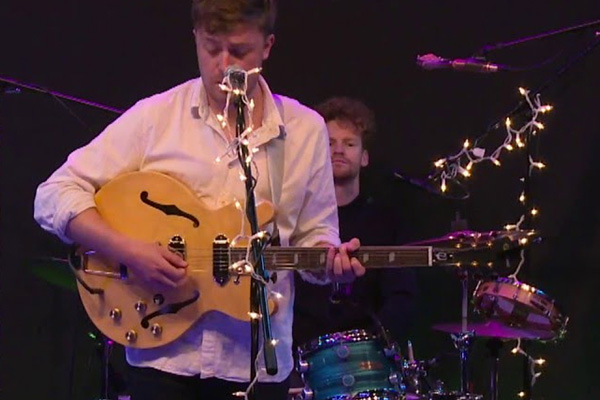 The High Highs recently did a Skype Live Session from the studios of KINK 101.9 in Portland, and performed “Bridge,” “Cascades,” “Catch The Wind,” and “Open Season”.

Check out a few videos from the session below! Be sure to scroll down for upcoming tour dates, too! 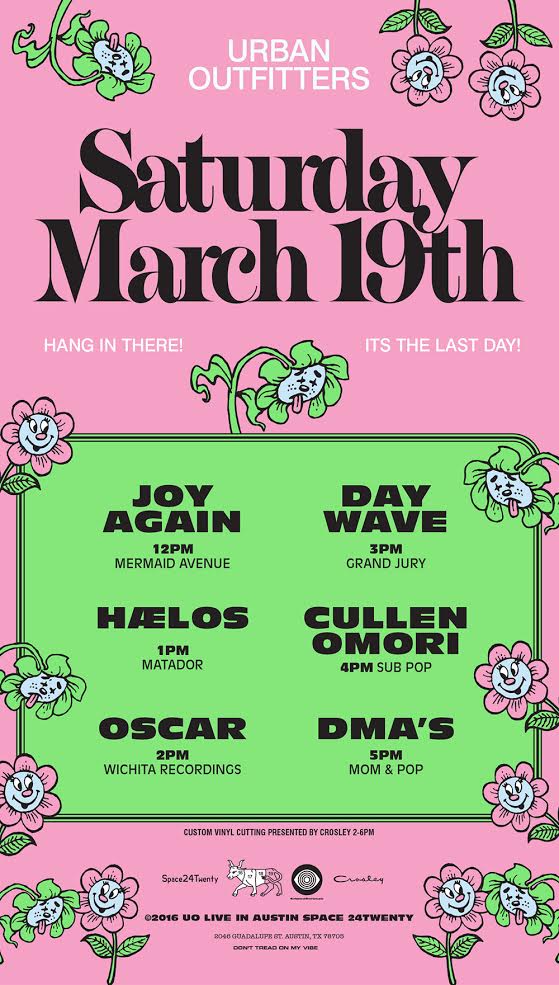